This writeup is a work in progress 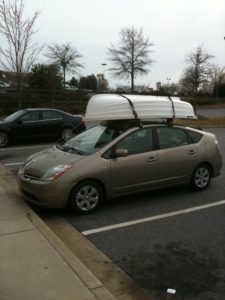 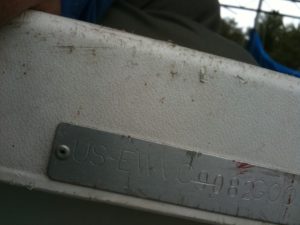 Modifications made related to my Walker Bay 8 with sail kit.

Why I wanted one

Experience and what done

Not modify the original unless absolutely necessary. Instead of drilling holes to add hardware, attach with hose clamps and duct tape. That way adjustments can be easily made as the experimental trials are undertaken. Also when going to sell the boat, it can be returned to its near original condition

Fabricated a steel daggerboard Which could be lifted and pinned to permit beaching, Since I had a rope lift handle and cross pins to keep it from sliding through the daggerboard slot, I cut part of a life cushion away so it could fit around the top of the steel daggerboard. This would be a good accessory for the regular daggerboard if someone wanted to sit on the center seat. However I even have a better design idea for that

Difficult to rig at dock

Extended mast section at top and filled with foam for floatation

Added Lazy jack to support sail when not raised

Added downhaul for foot of sail

Top inserted before bottom meant had to lean over transom more

No place to Tie to dock at permanent location

When sailing – tipped and took on water not drain out

This is a huge weakness in design in my opinion when converting to sail. If a gust hits or there is an unforeseen wave while the gunwale is near the water, water can easily come aboard, particularly with a heavy adult o board

I tried a number of options from measuring for a plywood attachment to a fabric supported by line more about that later.

FYI I have sailed the 10 ft. dinghy with the inflatable ring. There were two adults in the boat and not much room. The inflatable ring sort of solves the shipping water when blown over problem but it sure interferes with the sailing qualities of the vessel.

Not much room inside for a big person when sailing

Tried a number of options, none very successful – ended up straddling center seat.

When left at dock or upright on the shore water would accumulate in the hull. In my model there was no drain so I installed one. Still water would remain because the lowest part of the molded hull is below the opening for the drain link to page

The gunwales have individual closed off sections for reinforcement ribs. However when left upside down these collect wirer and moss and mold grow. I was going to drill holes in the pockets so water could drain out. However sold the boat before I got around to doing that

No topping lift – that is needed if using different mainsail rig

No lazy jack again not needed as configured

One of the dreams I had when buying the boat was to row some for exercise in the evenings. When I went to roe the boat would not track in a straight line because it was so short. Initially I inserted the daggerboard which helped a little. I then placed the tiller in the back and secured it in place with a line. The dinghy now rowed in a straight line.

For a larger and taller person the boom was unacceptably too low. I extended the top of the mast as I mentioned before so the boom could be raised. I added a loop higher that the boom gooseneck to accommodate the raised boom without removing the old gooseneck

The wheel assembly in the keel is suspect, mine broke and I had to replace it with a castor wheel. However the whole design, in my opinion creates handling problems and makes the dinghy less versatile.

If the dinghy had two parallel keels with wheels embedded that were lower than the center keel, the rowing and sailing performance would not be greatly effected and the ease of handling greatly increased. When pulling on land or upon a beach it would be stable particularly with the sail rig attached and any water in the hull would drain out the center since the boat would be sitting level. Your current design is difficult at best to maneuver

The way the boat is designed a big or tall person faces a number of challenges, Not the least of which is rowing. The oars hit the thighs of the person rowing as the oar handles are depressed enough for the blades to clear the water. I was discouraged from rowing because of this. I was going to b=fabricate some oarlock inserts that raised the pivot point so the rudder handles would clear the thighs.

The oars have an insert that goes into the oarlock ring so the oars can be shipped easily when not rowing. But not fall from the boat. My experience was that the oars would come loose from time to time and move around the boat when sailing etc. I added a clam cleat on each oar so a small line could be run through to keep the oar in place as required

I did not do this on the walker bay because I gave up rowing it. However on my aluminum rowboat I added mirrors to the oars. One mirror was flat and the other wide angle. I was able to row without having to turn to check a head as frequently

I added a cleat and a Clam cleat on the end of the center seat to secure the mainsheet. There may be better ways of doing this but this allowed me to sit in the center of the boat and still more easily manage the mainsheet or even cleat it in place. I did not have to move much in the boat, sitting straddled on the seat

At the same time, I removed the attachment point for the mainsheet block in the center of the seat.

My boat did not come with one so I made one using a dowel and parts from a 7 ft. dinghy I designed and built a number of years ago. It worked well and was essential for me to be able to sit on the center seat and steer

FYI in the boat I also had a small anchor with line and a collapsible paddle. There is really no place or accessory to store gear in the dinghy such as those items or a dry bag and no place to easily attach them

Paddle or row out from cove into the lake