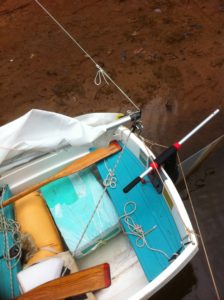 Problem: When rigging the Walker Bay 8, the mainsheet had to be run through the block on the traveler. It was a pain and took time.

Action: I replaced the blocks and connected the two of them with an “S” Biner clasp which could be easily released

How much money it took to develop: $50 for the blocks