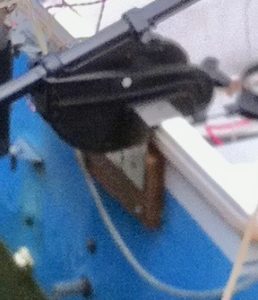 Problem: The Capri 14.2 sailboat hull that I purchased had some holes drilled in the transom where someone had attached a stationary outboard motor mount, because I think they used the hull as a fishing boat. To get from my dock out to the wind, my small boats require an electric motor. I investigated purchasing a stationary motor mount and I think they would be about $80. They also would stick out from the back of the boat, putting more weight in the back. I wanted something simpler, since I was only going to use an electric trolling motor.

Action: I rummaged around my inventory of junk looking for a board that might be used as a motor mount and couldn’t find one. The transom of the Capri 14.2 has a rub rail around it so whatever board that I would get to mount the motor to would also require a spacer behind it so the rub rail would be cleared. If I mounted the motor on a board, it would be higher, meaning that I might not be able to get the lower unit deep enough in the water to provide good propulsion.

As it so happens, my brother had given me a number of stainless steel U-shaped pieces that were about 2 inches wide and the uprights of the U about 4 inches long. The distance between the uprights was about an inch and a half. These brackets had a hole drilled through them about halfway up the uprights in the middle. These brackets are made of 16th inch stainless steel sheet, and are very substantial. It just so happens that they slide neatly over the top of the transom over the rub rail. All I needed to do was to attach a backing plate that would make up the space between the back of the boat and the rub rail overhang, attach the stainless steel pieces to that backing place, and then attach it to the hull using the existing holes. I ended up using 3 of those stainless steel brackets, side by side. The electric motor when affixed tightly holds these plates securely against the inside of the boat as well as against the backing plate. To keep the stainless steel brackets from scoring the inside of the fiberglass hull, I lined them with duct tape.

How much money it took to develop: None – Had all components