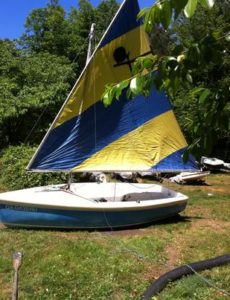 Problem: One of my sons bought a Capri 14.2 sailboat. As we talked about the different features, and I looked at pictures, it looked pretty interesting. And then one happened to come up for sale in the area. However, it was only the hull without rigging. The hull had some damage. It did have the centerboard, but it had no rudder. Of course, I had to go buy it. If nothing more, just to be able to have more in depth conversations with my son about the boat.  Once I pressure washed the boat, which was filthy, I determined that the damage to the hull was easily repaired and that in fact the boat could be sailed. However, with its original rigging and sails, the boat is fairly fast and nimble, and I wanted something that was easier to sail. Since I have done so many modifications with the sunfish rigging, I thought that adding a sunfish sail would be an expedient option.

Action:And so I did, incorporating the rig for putting a smaller sail in place of a larger one and topping lift/lazy jack topping rig that I have written about elsewhere on my Sunfish. I had a rudder from a 7.5 foot dinghy I had designed and built some time ago. While the rudder is not as large as the standard one for the Capri 14.2, I felt with a smaller sail area it would be adequate. So I ordered some pintles and made a tiller out of an oak piece I had and used a tiller extension from one of my Sunfish. I added some length to the mast so the boom would provide a great deal of head clearance, and suspended the mast with some Amsteel line. I added some blocks to the boom of the Sunfish sail so they would be positioned correctly relative to the traveler and the mainsheet cleat. The next action I took was adding an electric motor. (See .010404 Capri 14.2 Sailboat Outboard Motor Mount (a)) I also added a Linda seat for the boat. (See .010402 Capri 14.2 Sailboat Linda Seat)

Result: It worked pretty well though the boat was fairly underpowered.

Additional Thoughts: If someone happened to have a Capri 14.2, that had all the original mast and stays, with the rigging to accommodate a smaller Lanteen rigged sail, they could very easily duplicate what I’ve done and be able to trade out between sails very easily.

How much time it took to develop: 6 hours

How much money it took to develop: $25

Since it was originally done: I acquired a Capri 14.2 mast and rudder and purchased a new suit of sails and continued with other modifications.