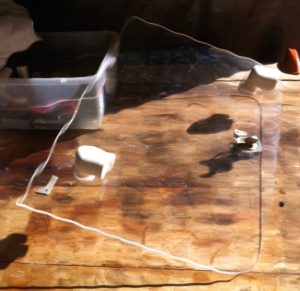 Problem: When I purchased the Capri 14.2  hull it was in rough shape. The cubby hatch, made from teak plywood was in bad shape. One of the first things I thought I should do, which was really not too bright, was to replace the wooden cuddy hatch that was largely deteriorated.

Action: I decided to replace it with 1/4 inch plexiglass. I cut it to size and mounted the original hardware on it and placed it in the boat, With the Plexiglas closing off the cubby area, the boat sat in the yard for awhile while I was determining what to do with it. Unfortunately, the water from pressure washing inside the cuddy area had not fully evaporated, and so the moisture was trapped, since I did such a good job with the Plexiglas, and it developed a bit of a musty smell inside. Subsequently I have drilled and tapped holes in the Plexiglas, one at the top and one diagonally in the bottom, in which I will screw in 90 degree PVC elbows, allowing for ventilation but yet keeping rain out. The bottom of the elbows can always be plugged if I ever want it to be relatively watertight.

Additional Thoughts: If I were to add ventilation again I would have found or made something that protruded from the hatch less than the PVC elbows did.

How much money it took to develop: $15

Current status: Sold the boat with the hatch