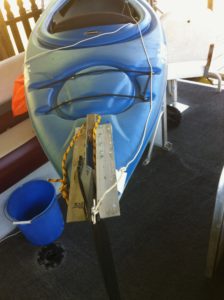 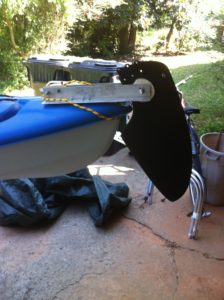 Problem: I acquired a 10 ft kayak that I was too tall to fit in. However I still wanted to use it. When I sat on top and paddled the kayak would turn side to side a bit. When I stopped paddling, it would drift for a while then turn to one side or the other and I would have to correct with paddle strokes. this was very annoying and not relaxing at all.

Action: I  had a hobie rudder so decided to mount it on the stern of the kayak and have it rigged so it could be raised or lowered from the cockpit. I had some angled aluminum which I used to create a mounting bracket and after a couple of tweaks had a rig that worked well. Best of all, with the rudder down, the kayak tracked straight and true for a much longer time when I stopped paddling. I now had my relaxing experience!

How much time it took to develop: 2.5 hours

How much money it took to develop: None had parts

Current status: Sold the kayak to a neighbor boy who could fit in it

Since it was originally done.