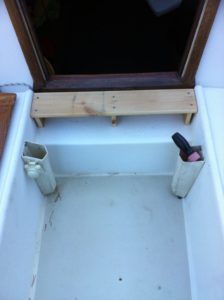 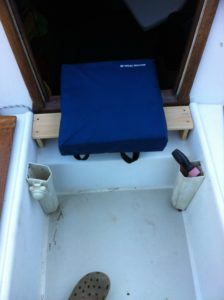 Problem: Not too long ago I took 3 others out sailing in my Capri 25. Two of them were new to sailing, but up for the adventure. They also were in their late 50s, and one of the ladies was not athletically inclined. We had been out for about a half an hour and the winds freshened. As we came about, I asked everyone to move to the windward side of the cockpit. She decided she was quite comfortable sitting where she was. We were going along quite nicely when this puff of wind came and heeled the boat over to 15 degrees. She was staring up and had this look of combined horror and panic on her face as she was being tipped backward. I quickly released the sails and the boat sat upright in the water. And so we had a little discussion about where the best place for her to sit might be.

I had an extra throw cushion so I suggested that we put the throw cushion in the companionway threshold. She could sit in the opening, in the middle of the boat, facing forward, with her feet resting on an inside step, and be able to hang on to a winch on either side of the companionway for stability. She thought that was a good idea, and immediately we arranged that. We proceeded to sail for the rest of the afternoon and had a wonderful time, all the time, her remarking all over again, “Why didn’t you tell me about this before? This is so much fun!” I told her the next time she came sailing there would be a seat ready for her, named after her, that she could use.

Since it was originally done: There may be usefulness in creating some way of attaching it to the surface in front of the companion way, above the companionway step, so it is secured in place. On the other hand, by having it fit tightly in there, being held in place by someone’s backside, it means it can be easily removed for moving in and out of the companionway.