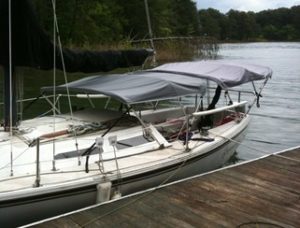 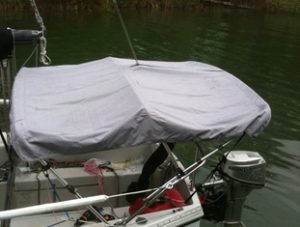 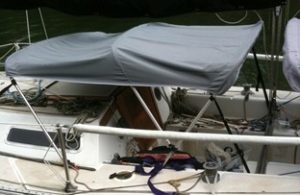 Problem: The Capri 25 has a large cockpit. It also has a traveler that basically bisects the cockpit. It also has a backstay. That means that a normal bimini that would kind of sit over the center of the cockpit really isn’t possible. A bimini that fits aft of the traveler has to be configured such that part of the framing goes behind the backstay and there is an opening in it so that the backstay can be accommodated in the top of the bimini. I wanted the bimini forward of the traveler to extend over the companionway opening so that in rain people could move in and out under shelter and with the two bimini tops, most of the cockpit would be shaded.

Action: I purchased two bimini tops that would span the cockpit and then I bought some used bimini bows (aluminum frame) and hardware to modify them to meet all of the requirements. All the attachments were made using easy to release pins. I created a special rig for the front bow of the back bimini that allowed me to release a line, it would be held in place by a bungee, but I could easily push the bow back to get out of the cockpit and move around the boat. I made a similar rig for the aft bow of the front bimini so that bow could be moved easily forward or back. Since I have my lines rigged so that they all go back to the cockpit, that feature was mostly used for getting on and off the boat. When the biminis were not in use the forward one collapsed forward so the access into the boat was not impaired. the back one folded up, from the front and back, along the backstay.

How much time it took to develop: 20 hours

Current status: I sold the boat but retained the bimini parts.