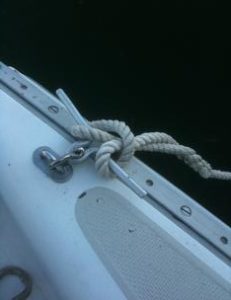 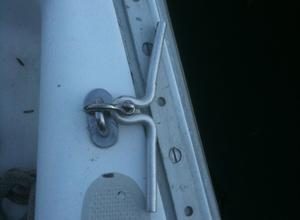 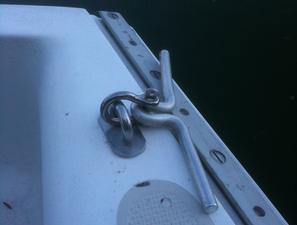 Problem: For some reason on the aft portion of either side of my Capri 22, instead of cleats for mooring lines there was a U-bolt kind of fitting in its place, perhaps used to secure some special blocks for racing. However, it means that there is not a quick and easy place for a mooring line to be secured.

Current status: Sold the boat – Cleat available for use.

Since it was originally done: This cleat configuration was on the side of the boat next to the dock. On the other side of the boat I had a carabiner looped through the U-bolt in case I need a quick release to tie up something on that side. The “cleat” is superior for mooring purposes to the carabiner, in my opinion, because the carabiner requires two hands to free the line, where the “cleat” only requires one.