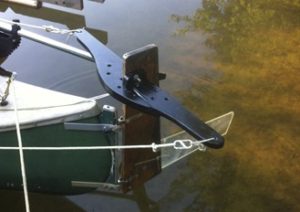 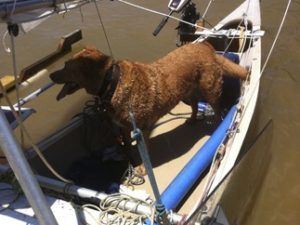 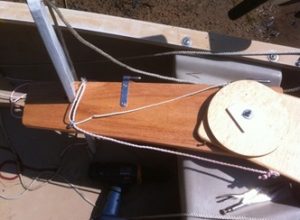 Background: Adding a sailing function to a canoe meant that I needed to have a rudder. I needed to have a way of attaching it to the boat and a way of turning it. I had already decided that I wanted to be able to sit down or lie down in the canoe when I was sailing, to keep my weight as low as possible, and also be sailing the boat facing forward.

Problem 1: Attachment to the canoe –  I wanted to be able to attach the rudder to the canoe without really altering the canoe.

Action 1: I devised a fitting that would be held in place at the stern of the canoe by bungee cords. One day I was out in some fairly high winds and while steering the bungee attachments proved inadequate to hold the rudder firmly in place. When I returned to shore, I secured the attachment piece to the stern of the canoe with stainless steel screws that went through a pressure treated block inside the canoe.

Action 2: Initially I thought I would use a rudder that I had built for a dinghy many years before. It was about the right size and readily available. So I modified the fitting locations to fit the bracket that I had made for attaching the rudder to the canoe. I also attached some lines so that the rudder wouldn’t jump out of its pins accidentally and also secured the tiller to the canoe in case it fell off it wouldn’t sink and I could easily retrieve it.

Action 3: Initially I devised a tiller that could be used by moving it over my head as I sat in the stern of the canoe. While this worked OK, for initially completing a sailing rig, it ultimately proved unwieldy and was replaced by a steering bar attached to the rudder and steering ropes fed around a block system around the gunwales of the canoe. The steering bar was fabricated so it could be quickly disconnected from the rudder. Superseded: Rudder was replaced with a kick-up rudder, crossbar, the steering was upgraded, attachment point as noted above.

Result: For converting the canoe into a sailing vessel initially, it worked well!

How much time it took to develop: 15 hours