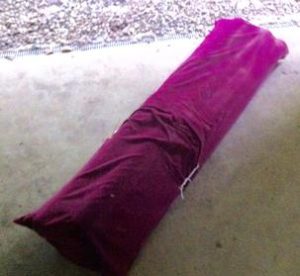 Problem: For my sailing canoe I wanted to have some floatation in it since I had added a battery, the weight of the mast and sail, and other things. Initially I purchased a number of closed cell foam swim noodles, 6 of them, around 4” diameter. I tied them in place, three on either side, with a line. Over time, as they sat in the sun, the swim noodles began to deteriorate and specs of the material would be inside the canoe. Also, because I tied them in place, it wasn’t easy to shift them around as I was reconfiguring the rig.

Action: I had two king sized pillow cases that I used to encase all six noodles and then held together with a line through a couple of grommets that I put in the pillow cases. Now the swim noodles were all contained, could be easily relocated, and were protected from the UV rays. Any deterioration that did take place would be contained within the pillowcases.