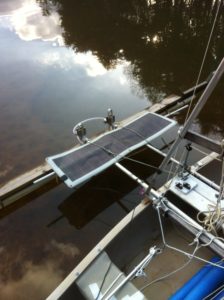 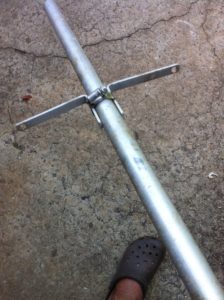 Problem: When I first added the outrigger to the canoe the arms were fairly far apart. I wanted this canoe to have a solar charger that would replenish the battery fairly quickly, thus a large panel. I also wanted it to be able to be oriented perpendicular to the suns rays for maximum collection.

Action: I made a swivel bracket on which I mounted the solar panel with zip ties through the 6 holes so it was supported by the cross pieces. I also added an arm that was attached to a line and cleat so the panel could be rotated.

Result: It worked great while I had the outrigger arms wide apart!

Additional Thoughts: As you can see from the picture that the ability to rotate the solar panel was lost when I brought the arms to the outrigger closer together. I decided to make no further changes that might restored the rotational capability. The solar charger still worked well.

How much money it took to develop: $15 for the frame and $325 for the solar charger

Current status: Sold the canoe and the charger