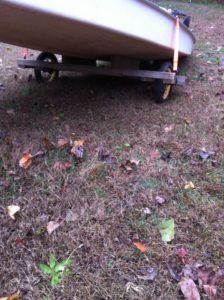 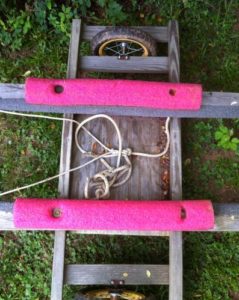 Problem: In March of 2011 I acquired, among other things, a Sunfish sailboat, from a neighbor, that I towed over to my beach. While it was in pretty fair shape, the automatic bailer needed to be replaced, which meant that it needed to be brought up to my workshop area. Since I had no dolly, I thought I would make one that would be able to transport the Sunfish, but not be tailored specifically for the Sunfish.

Action: I went to Goodwill and found a child’s bike with 12” wheels, removed the wheels, constructed a frame for them, and on the frame placed a couple of bunks for the boat to sit on. This frame could then be attached to the boat with a strap tie down, and the Sunfish could be easily moved around.

How much time it took to develop: 3 hours

Current status: Taken apart since I no longer have a small boat.