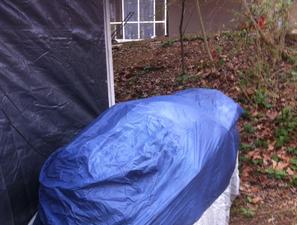 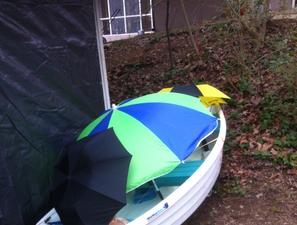 Problem: I have been working on my Walker Bay 8 for some time but I had wanted to move it outside next to the carport. Doing so, of course, exposed it to water and debris, which would mean more cleaning. I thought about throwing a tarp over it, as I had done when it was on the dock, however, the tarp sags and collects water. My first thought was to get one of my bimini bows and secure it in the center of the dinghy, and then hang the tarp from that. However, the same problem really would be inherent in that wherever the tarp sagged, water would collect.

Action: To keep this from happening, I thought that umbrellas lined along the center of the boat, fastened to the bimini frame would hold the tarp up and have it drape over the side such that it would be unlikely to catch water. Instead of a tarp, as a first try, I thought I would use the old motorcycle cover that I had used previously in a similar fashion on my riding lawnmower.

How much time it took to develop: 20 minutes