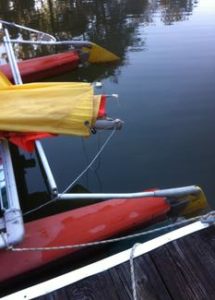 Problem: In the previous version, I had the clue reefing line pass through a block that I had added at the end of the boom. When I first tried to reef the sail using the rig, there was still a lot of friction on the line as it passed through the clue reefing grommet. I wanted to eliminate that friction.

Action: I took two actions. The first was to use an Amsteel line that I had which is quite slippery, and the other was to add a block attached to the reefing clue grommet.  With this rig, the reefing can be accomplished more quickly and easily, though the clue reefing grommet is not as close to the boom when the block is used.

How much time it took to develop: 45 minutes