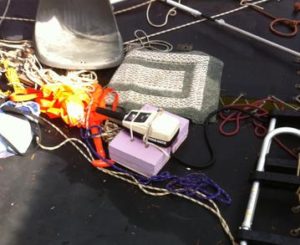 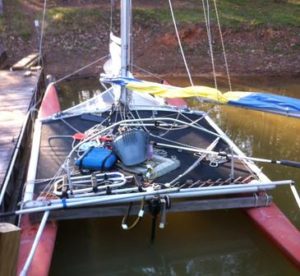 Problem: Because I live in a cove, it takes a while to get out to open water where there is enough wind to be able to maneuver my sailboats. Each boat then requires a motor of some kind if it can’t be paddled, like my Sunfish. My Hobie 16 definitely needs a motor. There are motor mounts, but they are expensive, and they also require the motor operator to be at the back of the boat, operating the motor. In my case, being an old man, I wanted just to sit in one place on the Hobie, and control everything from my central location.

Action: A number of things were done, too numerous to go into at this time, however, the essential components include removing the control head and extending the cables so I could have the control head next to me and would not have to be at the back, touching the motor to control it. The other main component is the ability to raise or lower the motor without having to touch the motor. I had a small winch-like device that I used on the 7.5 foot dinghy that I built 35 years ago that worked just fine in terms of being able to raise and lower the shaft. The other remaining component is the steering, which I devised in a manner similar to my canoe, with two arms that ropes would be attached to that I could control from my central location. When I started out, I had put a 2 x 4 across the hulls in anticipation of hanging a motor there so I could ferry the Hobie from the launch site into my cove. As a first pass, I decided to keep the 2 x 4 as the mounting place for the motor, although it was re-adjusted to be closer to the trampoline, so the motor shaft would clear the tiller-connecting arm.  An astute Hobie sailor might say, aha! But how do you keep the tiller from colliding with the motor shaft when the motor is up and the boat is being sailed? For further insight, see my stick steering for the Hobie 16.

How much time it took to develop: 8 hours

Since it was originally done:Removed this mounting and made another – Third version