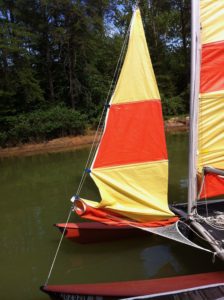 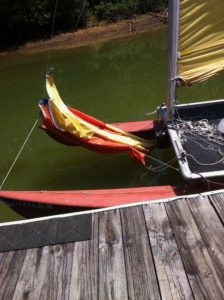 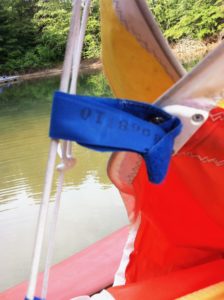 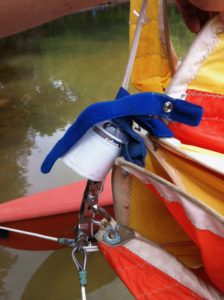 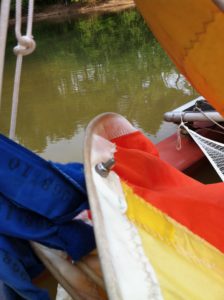 Problem: I sail my Hobie 16 on a lake. My dock is in a cove that requires me to motor out to the lake before I raise my sails. Based on the way the Hobie 16 is designed, it was really meant to be rigged from the beach. If I rig the jib it provides so much wind resistance when I am motoring out with my electric motor that it is counterproductive. However, because the jib is secured at the top and at the foot when it is lowered, it drags in the water.  Also, when I am out in the lake, if I want to reduce sail, I am faced with the same problem. While I have rigged a line to pull the sail down from the cockpit, it still drags in the water. If the jib had hanks at each batten end, the sail would collapse and be connected still to the jib stay.

Action: Since the jib stay is only used as a guide to run up the attached head of the jib I needed to add hanks to hold the sail to the jibstay when raising or lowering it. To secure the hank, which is made up of a Velcro strap, which I happened to have, I drilled out the forward most rivet from the plastic batten stop on the jib and fastened the Velcro with a stainless steel washer, screw, and Nylok nut. Now when the sail is lowered, it slides along the jib stay and folds in the center of the Hobie hulls without fully dragging in the water.  Initially when I lowered the jib, using the Velcro strap hanks, they went down over the forestay connector, becoming fouled on the shackles. To eliminate this, I took a plastic jar, about 2 inches in diameter, cut a portion off the bottom, drilled a hole in the center, cut a slit in it, slid it onto the forestay, and down over the shackles, and secured it with duct tape. When the Velcro strap hanks came down on top of that, they stopped, eliminating the fouling.

How much money it took to develop: None – had the parts

Current status: Sold the boat with this rig removed

Since it was originally done: Subsequently I rigged a Capri 14.2 with a new suit of sails. Because the hanks that came with the sail (the same as at the head of the Hobie) would twist off the jibstay when lowered I replaced them with Piston jib hanks. I could have done the same with the Hobie jib as well and avoided drilling out the rivets.