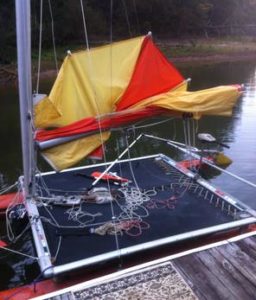 Problem: When I go out on the Hobie, I want to take along my paddle, my hand held rear view mirror, boat hook, dry box for identification, a sack for some extra line, phone and so forth, and a life cushion. Initially, when I laid them out on the trampoline, they were kind of getting in the way and fouling the lines. Also, for the dry box, I would specifically lash it to the webbing lines. All this was kind of a pain, as well as it took extra time to tie and untie the items to the trampoline.

Action: I fastened a length of line to the trampoline webbing in the middle with a loop  on it, and then attached a line loop to each one of the items, with a snap hook on the line. Now, each item could be quickly attached to the main tether lie, but they could also be pushed out of the way and not foul the running rigging.

How much time it took to develop: 30 minutes

Current status: Removed when I sold the boat