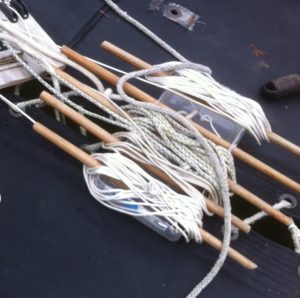 Problem: In my quest to modify the Hobie to serve my needs for center seat sailing, and the ability to manage the sails from the cockpit, I have introduced a great many lines onto the trampoline. They quickly become a tangled mess. The Hobie trampoline has one pocket for storing some lines, but I wanted something that would store the lines and then allow the lines to be paid out without becoming tangled.

Action: I decided to use the concept that sailors had been using for eons, and that is belaying pins where the lines can be wrapped around but easily and quickly released by pulling the pin. I took a plastic bin, cut it down to about 2” high, and then drilled holes in it in which I would insert the pins. Luckily, about two weeks before, I sat down on my teak chair and it collapsed, broken into several pieces. However, the back dowels were perfect for the belaying pins.  As you can see, the lines are now nicely contained.

Since it was originally done: In my initial version, the pins that did not have lines around them would slip out because the Hobie tramp is slanted aft. So in the last version I had the pins reversed so that the fatter portion wedges up against the forward hole and the pins stay in place where there are no lines on them. However, to release the lines, I had to lean forward and retract the pin forward. I  subsequently devised a way for the pins to stay in place but then slide easily aft to release the lines.