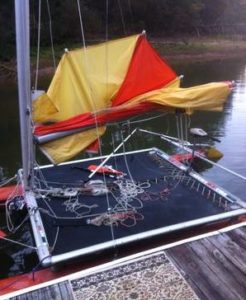 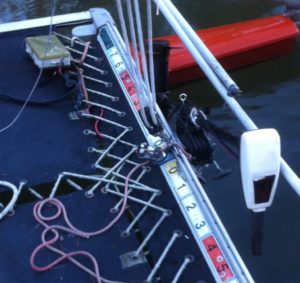 Problem: I need a way to motor the Hobie out of my cove into where there’s wind. In previous modifications. I thought that because I’d be in a center seat sailing position that I wanted to have my motor control readily available to me as I was facing forward. I also wanted to be able to raise and lower the motor so it would not produce drag while I was sailing. In addition, I had it rigged so that the motor would be driving forward in a straight line unless steering ropes were activated. This all worked relatively well, except the motor couldn’t be raised high enough to keep the propeller high enough out of the water while I was sailing. The overall rig for steering and bringing the electricity to it was involved and meant disassembling the motor.

Action: I removed the arm attached to the bottom of the motor connected to a bungee cord to keep it in alignment. The cord and the arm were under water and produced drag. What also happened was that I could not tip the motor up sideways as far as I needed to because of the steering arm. Once the steering arm was removed, I could then tip the motor sideways so that it was no longer in the water. Because I am using the motor only when I am trying to get to the sailing area, the motor shaft does not stick up to interfere with the boom. If I do need to steer with the motor to assist the rudders, I can reach the control tiller on the motor. To connect the electric motor with the battery, which is in the battery container in front of the mast, I used jumper cables.

Since it was originally done: Removed and mounted motor in front – fourth version