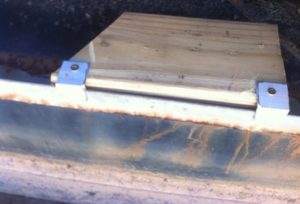 Problem: The docks I have are metal frame docks that sit on top of covered Styrofoam floats. The bottom of the frame distance to the water is maybe about 12 or more inches, depending. There are two issues with the dock. The first issue is when one is trying to step into the water from the side of the dock. Instead of stepping on a metal frame, which hurts the foot, it is useful to have a flat surface to step on. Similarly, when coming up on the dock, when the water is shallow, it is also good to have a place to reach up for the foot to step on. When the dock is resting on the beach because the water level has dropped it is much easier to step up on the dock using a step surface.

Action: To build one or more rectangular wooden steps that hook over the edge of the metal frame to hold it in place and rest on top of the covered floats. Since it rests on top, it can be easily moved to wherever it is needed.

How much money it took to develop: None.