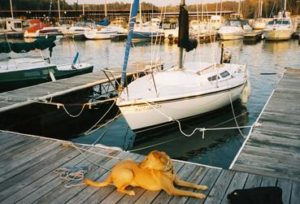 Problem: A number of years ago the water in Lake Lanier was very low so I had to take my boat over to a marina where it was exposed to more wind and waves than at my dock. I wanted the boat, as it was tossed to and fro, to not be jerked up short as the mooring lines became taught, putting excessive strain on the cleats. I purchased 4 mooring shock absorbers that had a loop on either end to secure them. At the time I wanted to be able to easily adjust the distance the shock absorber could stretch.

Additional Thoughts: As far as I am concerned, shock absorbers are really essential, particularly if one is spending time on the boat while it is moored. In addition to reducing strain on the cleats, it creates a lulling motion within the boat itself as it smoothly moves from one side to the other. Well worth the money!

How much money it took to develop: $80.00 Approximate cost of shock absorbers

Current status: Available for use. At my dock, where my boat was, the bow and stern mooring lines were still using the shock absorbers, even though it was moored only on one side.