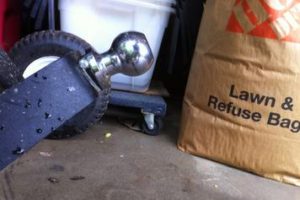 Problem: When I modified the trailer dolly so it could be attached to my lawn tractor, I noticed that the ball then was tipped quite a ways forward. If the ball was positioned on the trailer dolly at an angle, tipping away from the handle, that would mean that the ball would not be sitting exactly perpendicular when the boat dolly was used by hand, and it wouldn’t be sitting perpendicular when the boat trailer dolly was used with the garden tractor, however, the variances would be even.

Action: I wanted to put a wedge insert into the shoulder of the ball, and then in parallel underneath to the washer and nut. I initially used a piece of wood which ultimately split. For my second try I used some door hinges which provided enough of an angle but of course if there was a wedge that was made for that purpose, it would perform more satisfactorily.

Additional Thoughts: If this feature was built in then the bar that the ball rested on would be twisted enough to create the angle or there could be two versions made, one with the angle support and the other standard.

How much money it took to develop:  None