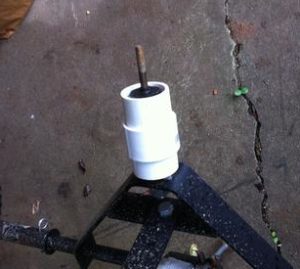 Problem: I have a number of boats that I store upside down or they are on dollies of their own. I wanted to be able to use my trailer dolly to move my boats around even thought they wouldn’t necessarily have a receiver for the ball to go into My rowboat and my Walker Bay 8 foot dinghy were upside down on dollies. They each have a hole in the bow for a line that would be a great place to connect the trailer dolly to the bow of the boat and then be able to easily move it around the yard.

Action: From various PVC pipe and other parts I fashioned a sleeve that fits over the ball and has a pin protruding about 3 inches. When I go to move the boats that are upside down, I put the pin attachment, slip it over the ball, lift the bow of the boat, and place it on the pin.

Additional Thoughts: Since the ball doesn’t really need to be super secured on the trailer dolly, it would be awesome to have a quick release mechanism so the ball could be removed and other attachments secured such as the pin.

How much money it took to develop:  None

Since it was originally done: I may ultimately modify the ball attachment so I can incorporate the quick release feature and redesign the pin attachment so it also can fit in the frame and be quickly released.