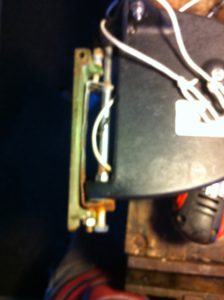 Problem: I decided to sit in the cockpit facing forward so I didn’t have to jump from side to side and it would be comfortable for a 72 year old 6’-4” 250 lb. skipper. However, that meant that grabbing the tiller extension and steering that way was pretty much impossible. Previously, I had made a longer tiller extension, which wrapped around and I could more easily manipulate it from the side. However, the range of motion was limited, the positive feel was reduced, and sometimes I still had to bring my arm way around my back.

Result: It worked almost great. It turns out that the arm attached to the rudder wasn’t really long enough to give me an easier turning feel so I extended the arm by about 5 inches and now it works great.

Additional Thoughts: See my modification to a regular Sunfish rudder, which will achieve similar results.

Since it was originally done: I have developed an additional Sunfish rudder modification.