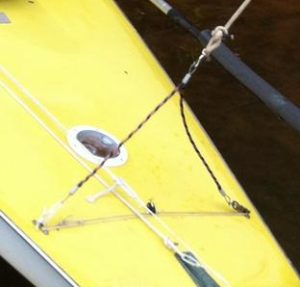 Problem 1: The main problem that I have with the current bridle configuration is that the tiller has to be slipped through the bridle before it can be fastened to the stern. Which means it is awkward to do that from the boat and it almost requires doing it before the boat is launched or wading into the water. Should something occur on the water, it makes it more difficult potentially to deal with the issue if one has to slide the whole assembly out from underneath the bridle before it can be dealt with.

Problem 2: Some of the Sunfish bridles had suffered UV damage on the plastic coating which was brittle and flaking off. I removed the original damaged covering and again covered it with polyethylene tubing.

Action: I have acquired several sunfish, and there was only one that had the bridle fully intact. For the ones that had bridle issues, I replaced the broken bridle with a rope secured at one end and then I put a clasp on the other end so that the tiller and rudder assembly could be moved or worked on without having to slide the tiller all the way out. Further, because the rope alone would collapse and get caught under the tiller, I stiffened it in several different ways, but mostly by inserting it in or coiling around a polyethylene tube. For the bridles that were still attached, but the coating had suffered UV damage, I removed the coating and covered the cable with gas line tubing slit and slipped over it with duct tape spiral wound around it to hold it in place.