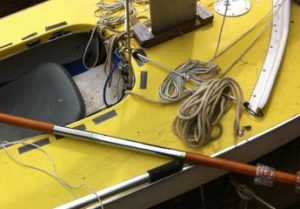 Action: The Sunfish that I had, had the mainsheet hook at the front of the cockpit cowling. I made a small loop out of a small piece of line and then took two bungee cords, connected one end through the loop and the other end to the outside of the splash rail. To adjust the tension, I tied some knots in the bungee cord to shorten it. When the lines were coiled, they fit under the bungee cords and were held to the deck in place, ready for easy access.