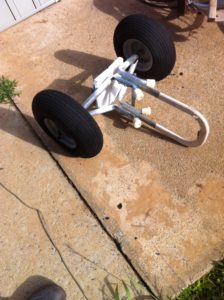 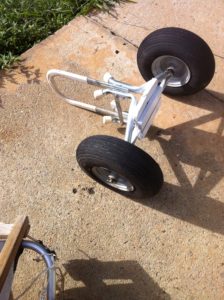 Problem: The Sunfish dolly was really poorly designed in my opinion, When I bought it the angle arms coming from the axle were bent enough that the bottom of the sunfish would rub against the wheels.

Action: After removing some of the bend from the angle supports I inserted a wooden support for the frames that rested on the axle and prevented the angle pieces from recollapsing.

How much time it took to develop: 30 min

Current status: Sold Sunfish and dolly with fix in place