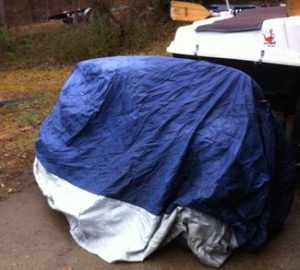 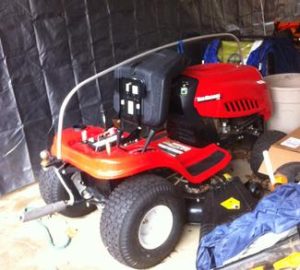 Problem: Since I purchased my new riding lawn mower, it has been stored inside my carport for protection. However, it takes up lots of space and it really doesn’t need to be there if there was a way of having it adequately covered. A number of years ago I acquired a large motorcycle cover that I have used in the past. On the previous riding lawn mower, I had draped the cover over it, however, the cover would number one, blow off from time to time, which meant I had to take extra time to secure it, and because it was draped over, the configuration of the mower meant that there were places where water would accumulate. I wanted to cover my mower but do it in such a way that the water would run off.

Action: I thought if I had a frame that went over the top of the mower, the tarp or the cover would then drape from that, so lo and behold, I happened to have an old frame from a bimini top that just happened to be long enough to go from one end of the mower to another. I then secured the frame about in the middle to the steering wheel with a Velcro strap. This is after I had tipped the seat forward. Now that it was held in place, the only thing to do now was to secure the cover to the aluminum frame. The ideal solution would be large stainless steel binder clips that could be easily put on and removed. Until I acquire those, at either end of the frame I secured the cover with small C-clamps. As fortune would have it, the evening that I did this, it rained. The tarp stayed in place, and there were no puddles of water accumulating on the cover.

Additional Thoughts: When idea was conceived: 3/3/15

How much time it took to develop: 45 minutes

Since it was originally done: Bought a mower cover made for the mower.