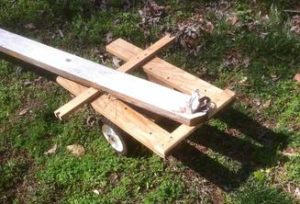 Problem: There are all sorts of dollies that basically have a couple of wheels and a long handle and some kind of a ball or attachment for moving boat trailers and the like around. I had extended the tongue and put the cross braces on top and had one of my canoes on the trailer. I wanted to move the trailer around without lifting the tongue.

Action: I devised some wheels to go under the tongue such that if I pulled the tongue with a rope, they would turn and I could pull the trailer around easily. I already had a small dolly that I had built for my ocean kayak, which I no longer have. I fashioned a couple of cross pieces on that, with a place for it to pivot around the hitch pin.

Result: It worked pretty well! The way it was constructed, it had a limited range of motion and I hadn’t put anything between the surfaces to make it easy to move from side to side.

Current status: No longer in use. Removed the extended tongue.

The cross pieces were removed and the wheel assembly it went to my son, along with the canoe, and now serves as a canoe caddy.