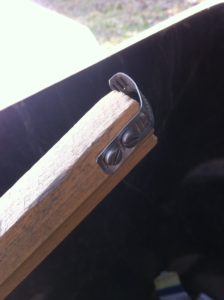 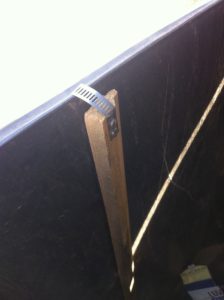 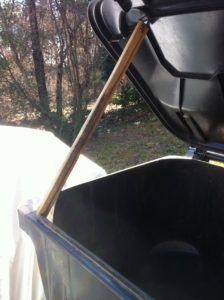 Problem: My trash bin that gets picked up and empties weekly has a large cover on a hinge. Sometimes I am carrying something with two hands which requires the lid to be opened first or I have multiple items to be put in that requires multiple openings. To have the lid stay open, it has to be flipped way over to the back.

Action: I made a lid prop stick that would be hung inside the bin when not in use.

How much time it took to develop: 15 min

Since it was originally done: Well, I am embarrassed to say but the very next time I went to use it after the trash had been picked up, it was not there! I had forgotten to remove it when I took the trash to the street because it was hanging inside and out of sight. I made another one and it is now hanging outside near the trash bin. Further, in November of 2017, I had rotator cuff surgery on my left shoulder. Needless to say, as a one armed bandit, I made extensive use of the lid prop when I took the trash out.