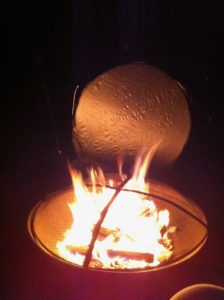 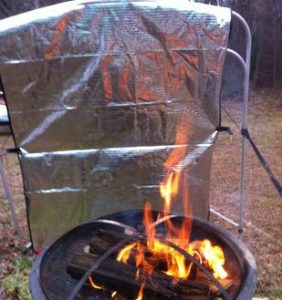 Problem: A number of years ago I was given a 3’ diameter fire pit, when my son and daughter in law moved to California. I used it a few times, and then it sat for several years. In the meantime, I had modified my Adirondack Chair and had it up under my carport so I could sit and take a break from working in the shop, and look at the lake.  After acquiring a new riding lawn mower through the internet, I ended up with a large amount of wooden crating material that the garbage company would not take. The only way to dispose of it would be to take it to a landfill or to burn it.  One evening, as I was sitting in my Adirondack chair, enjoying a drink, out of the corner of my eye I noticed the fire pit sitting at the corner of the house. And then I noticed the crating that was laying on the grass.  After cutting the crating into burnable chunks, I sat in front of a roaring fire a few evenings later when the temperature was about 40 degrees and the fire felt good. However, it seemed to me that there was an awful lot of heat that was going in all directions, in addition to my small radian. Perhaps a reflector would allow more heat to reach me.  I searched for one on the internet, thinking that I would find one and set it up. There may be one out there, but I didn’t find it.

Action: My initial action was to think about what I have that had a reflective surface and would hold its shape. My dashboard protectors that I got for my car came to mind. I supported them opposite the fire somehow and noticed more heat.  I sprang into action, acquiring a reflective survival blanket, and suspended it from an old bimini frame that I had. The larger surface of the blanket and it being better positioned to reflect the energy back to me, resulted in even a warmer fire pit experience. In addition, the survival blanket blocked some wind coming directly toward me.

How much money it took to develop: $20