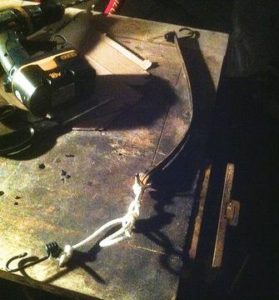 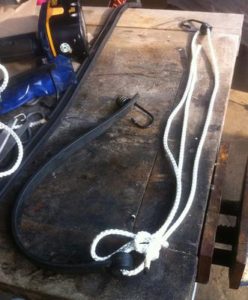 Problem: I wanted to tie some things down that would incorporate the elastic band of a bungee – those black bungee cords that are used universally. The span that I had to cover was quite long and I had to feed the bungee under a boat trailer.

Action: I made a loop at the end of the rope to put into the bungee. However when I was doing it myself the rope would fall off the hook of the bungee. To solve this problem, and also give me the ability to tension the rope as I needed, I removed the hook from one end of the bungee and fed my rope through the hole that the hook was in, tied it. So that the rope would all stay together, I took a hook from a regular bungee that had the hole in the end of it, fed the rope through that and then I can tension the bungee, securing it as desired.

Additional Thoughts: This can be done using a regular bungee but it is important to wrap the slip knot a few times around the hook and pull it tight so it won’t slip off. then tie another loop in the line that the other end of the line will be fed through as the line is drawn tight.