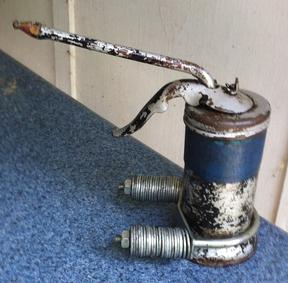 Oil Can Counter Balanced And Tip Over Extensions

Problem: Many years ago I bought a pump oil can which I really liked a lot better than the oil can that my dad used, and I actually inherited. It’s like a bell with a spout and you push the bottom to dispense the oil, thus the term, oil can. Anyway, I liked the pump oiler but I was very frustrated because I would be knocking it over and it was particularly easy to tip because of the weight of the spout and then the oil would run out.

Action: Add a weighted base that would also provide resistance leverage to the propensity to tip in the direction of the spout. To accomplish this, I found a U-bolt that would fit around the can, the ends of which would stick forward in the direction of the spout, and I loaded either side of the U-bolt up with washers to provide for weight. With the addition of the extension of the bolts, the width of the U-bolt, and the added weight, tipping has no longer been a problem when it is set down not exactly level or bumped up against, without too much force.

When idea was conceived: December of 1996

How much time it took to develop: 30 minutes