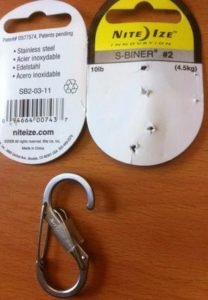 Problem: The S Biner is really a very versatile design. Since I have discovered them I have used them in many locations where I have needed something that would provide a quick release clasp and required stainless steel which does not corrode or rust. I wanted to use the S Biner to clasp onto a rod but I did not want the clasp to close.

Action: I found a vinyl tube and cut it to 3/8” and slipped it over one end of the S Biner so it would hold the movable wire clasp portion open. When I lift the object off, the S Biner does not come off the rod like an (S) hook might.