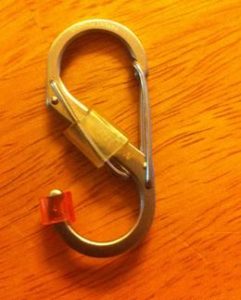 Problem: I wanted to use the S Biner which I had modified (see S Biner Modification) to use as a hook to hang a towel, but I did not want the towel to slip off the end of the smooth stainless S Biner.

Action: I cut a small piece of vinyl tube to fit tightly on the end that would then retain the towel.

Result: It works great! The towel does not slip off of the S Biner.

How much time it took to develop: 20 minutes