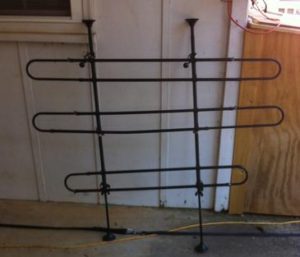 Problem: I bought the fence because I wanted to make sure that my 60-pound Lab mix would, one, stay where he belonged, in the back of the car, but also in case of a sudden stop, from hurtling forward and doing damage to himself or passengers in the front seat. The fence is adjustable to accommodate different size cars and is meant to be locked in place through tension, as the support rods are tightened, wedging it between the ceiling and the floor. When I initially set it up, it worked pretty well. I could adjust things so that it fit in my Prius, I could see through the bars out of the rear windows, and my 60-pound Lab was safely contained.

A number of things happened.
Problem 1: One day I noticed he was in the front seat. He managed to slide one of the bars over enough so that he could scooch through.

Problem 2: Another time I caught him almost through, as he had put his weight on the bars and moved them down enough so he could squeeze between the space of the bars.

Problem 3: The most frustrating thing about it was that the screw adjustment rods would fall out when I wanted to take the fence out of the car.

Problem 4: In addition, sometimes the barrier would not fully stay in place unless the adjustment screws were tightened however the wing nuts that they have for tightening were small, uncomfortable, and difficult to tighten in the confined space in front of the back seat.

In short, this needed a major overhaul.

Action 1: I purchased 6 small hose clamps that went around the bars that slid horizontally. I would clip them in place and tighten the hose clamp, and that bar was going nowhere. The dog was never able to get past it after that.

Action 2: I have 4 hose clamps that go on the main uprights that keep those bars in place.

Action 3: I took two small bungee cords and formed them into a loop so I could hook them over the wing nuts when they were loosened, to remove the fence. That way they stayed connected but yet I could easily remove the bungee when I go to tighten the rack.

Action 4: To keep the fence from falling back toward the back seat, I got some bungee loops with balls on the end that I looped around the vertical posts and the head rest support, keeping the barrier in place.

How much time it took to develop: 3 hours