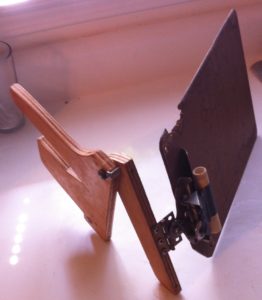 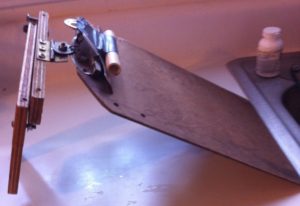 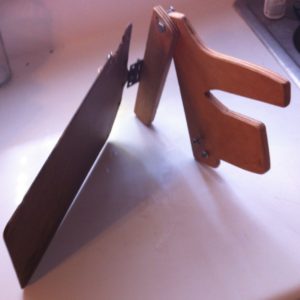 Problem: When I was riding along, I might hear something on the radio or have some thoughts that I wanted to write down, but there was no place to write anything. However, if I put a surface there, it would then block my ability to open the center console storage area. I also wanted something that could be easily removed and something where the clipboard writing surface could be removed. Also, it was important to have a pen at the ready for writing.

Action: I cut out a cross section of the cup holder so part of the support could be wedged in there, the place that the clipboard attached to was on a pivot so it could be lifted when I wanted to access the center console, and it was held on the insert by a tiny nut that could be unthreaded and the clipboard easily removed. The clipboard has a piece of PVC pipe taped to it where a pen is inserted in it and held in place. It also has an extra nut storage area in case I lose one. The pivot when it opens has a stop so it only opens to 90 degrees and does not flip over upside down in the seat or on top of someone sitting there.

Additional Thoughts: It could be used for other cars as well as the Prius.

How much time it took to develop: 6 hours