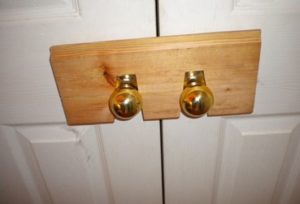 Problem: My tiny cottage has double doors, which are the total width of a standard door so they did not intrude into the space of the small rooms. However, there are no locking devices on the doors, or ways of keeping my dog from entering.

Action: I thought a board with some slots cut in it that could slip over the knobs might be effective. So I made a couple and put them on the doorknobs.

Result: They worked pretty well, but because of the rounded doorknobs and the tolerance so they would slip in, and so on, they could sometimes be dislodged by a persistent nose. And because the boards were not really very long, they allowed the doors to move in and out quite a bit instead of being fairly securely held together.

Additional Thoughts: In addition, I would have to have one of these boards close by so I could close the door from either the inside or the outside, which then became cumbersome and not very practical. The next thing I tried was a long piece of rawhide lace tied to one knob that I would then, when the doors were shut, pull across and wrap around several times around the other knob, allowing the end of the lace to dangle, putting some tension on the wrapping. I now have those laces on either side of the door so I can easily secure the doors, whether in the room or out. This setup works great!

Current status: The lace solution is in use.

Since it was originally done: A rawhide shoelace works the best because it grips the door handles more readily and fewer wraps are required.