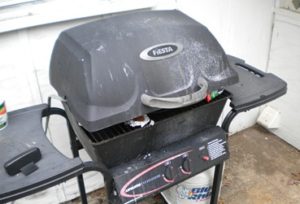 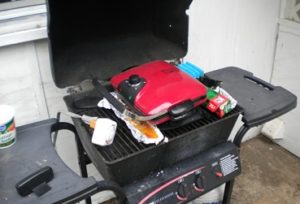 Problem: My small cabin does not have a hood vent over the stove and since there is a window behind the stove, there really isn’t a convenient place to put a hood. In addition, I really prefer that smoke breeze and other cooking byproducts not be in the house. I had received a George Foreman Grill as a Christmas present, and I really loved it, particularly because being heated on the top and bottom, it cooked the food very quickly. However, it created all of the undesirable effects of grilling inside.

Additional Thoughts: Initially, I didn’t have the timer there and forgot to turn off the grill. The timer solves two problems. I have it so that it will shut the grill off after 30 minutes, and I can use the on/off switch on the timer and leave the temperature dial fixed on the electric grill.