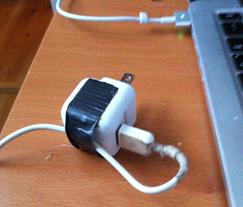 Problem: When I purchased my iPhone they had a wall charger that plugged into the base of the phone. This connector that went into the phone was a bar that had a cable coming out of the center. I have fairly large hands. It was difficult for me to grasp, to remove and to insert. More times than not, I would end up pulling on the cord, which was a very vulnerable spot and I was concerned that soon I would have to purchase a new phone charger.

Action: I ripped a piece of duct tape about ¾” wide, and 6” long. While the charger was connected in the phone, I wrapped the duct tape around and around the part that was protruding from the phone. I then squeezed the tape together when the cord was aligned perpendicularly to the connector, holding it firmly in place. I then took my scissors and cut the excess off in an angle beginning from a distance equal to the charger from the end of the charger, and ending where it met the cord, providing a tab that was easy to grasp. I did this on both sides, leaving a larger tab to hold on to all the while the intersection of the cord and the connector was reinforced and held steady. In this case I happened to use black duct tape. I found a piece of white duct tape and made a small dot from it that I pasted on the side of the connector that is toward me when I am inserting the connector. That way I know which way is up.